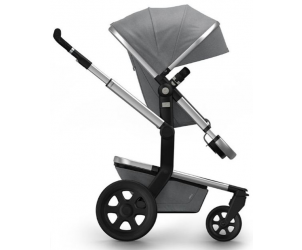 The Mamas and Papas Joolz Day2 Studio is a travel system suitable from birth to 15kg.It features a new super smooth compact fold, puncture proof tyres and an easy-access XL shopping basket. This travel system is compact and practical - it's the perfect travel solution for city life. Folds in one smooth motion. The Joolz Studio collection has leatherette handle and bumper bars, finished with double stitching. The lining has a quilted design and the collection comes with a silver chassis and black wheels.