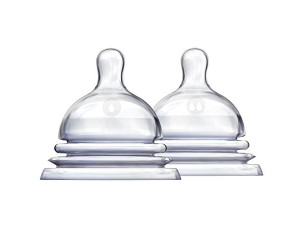 The Munchkin LATCH bottle is designed to imitate the breastfeeding experience. While other wide-mouth bottles may only look like a breast, the unique LATCH accordion teat moves and functions most like a breast, easing baby's transition from breast to bottle and back.

As is the case when breastfeeding, baby regulates the flow of milk by applying pressure to the base of mum's nipple. The LATCH bottle mimics this phenomena by releasing more breast milk as baby applies pressure against the teat's base.

The accordion-style teat on LATCH™ stretches like the breast, making it easier for baby to latch easily and correctly, to the back of the mouth. While feeding, the accordion-style teat flexes as baby's head moves. This makes it possible to maintain a good latch, limiting the ingestion of air and avoiding colic.

- Includes two BPA-free Variflow teats Variflow teat: The variflow teat has 3 different flow speeds, for use as your baby develops and feeds at a faster rate. Just position each speed icon (slow/medium/fast) under baby’s nose when feeding  in order to control the flow rate.