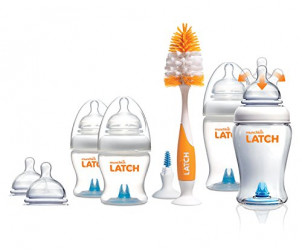 The Munchkin LATCH™ bottle was inspired by the breastfeeding experience. The accordion-style teat on the LATCH™ bottle stretches like a breast, encouraging baby's natural latch.

During breastfeeding, baby controls the flow: the LATCH™ bottle mimics that phenomenon by releasing more breast milk when baby puts pressure against the teat's base.

While feeding, the accordion-style teat flexes as baby's head moves. This enables baby to maintain a latch, limiting the ingestion of air.

The anti-colic valve at the bottom of the LATCH™ bottle means breast milk can flow while preventing air bubbles.

Experts agree that the easiest transition happens when bottle flow and mother's flow are the same. The LATCH™ Stage 1 teat's flow has been designed to mimic the flow from the breast. Stage 2 and 3 are also available, so you can increase the flow as your baby grows.