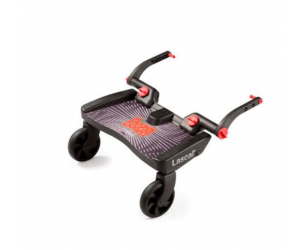 The rubber wheels are thick and higher providing stability and more room for parents' feet.

The BuggyBoard is designed to easily attach to the upright tubing of a stroller or to the frame of a pram with a width between uprights of 31cm - 54 cm (12" - 21").